For nearly three weeks in the summer of 1933 thousands of people poured into Pendine. There was a carnival atmosphere. They came to see Amy Johnson and her husband Jim Mollison. The Mollisons, called the “Flying Sweethearts” by the press, were attempting to fly across the Atlantic to New York from Pendine’s sands. This was part of a long distance record attempt that should have ended in Baghdad.

The Mollisons were experienced pilots. In 1930 Amy became the first woman to fly solo from Britain to Australia. In 1932 Jim became the first person to fly solo across the Atlantic from east to west against the wind. Several others had already died trying. Their plane, Seafarer, was a twin-engine de Havilland 84 Dragon Moth. It was fitted with extra fuel tanks filled with 600 gallons of petrol.

Although the weather in Wales was wonderful, it was not good out in the Atlantic. They left the Beach Hotel and the crowds and returned to London. Seafarer went on display in Cardiff.

They then returned to Pendine and on 22nd July 1933 took off from the sands for New York. They almost made it. Short of fuel they crash landed. They both survived with minor injuries. New York gave them a ticker-tape welcome. 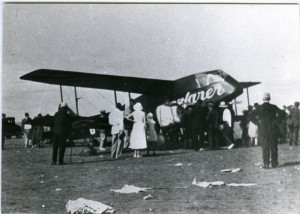 They then lunched with President Roosevelt and Amelia Earhart. She had been the first woman to cross the Atlantic. She and her pilot landed in Burry Port, Carmarthenshire in 1928. Amy and Jim were the first married couple to cross the Atlantic. They were divorced three years later. Amy Johnson disappeared in 1941 over the Thames Estuary. She was flying a plane for the Air Transport Auxiliary. Her body was never recovered.